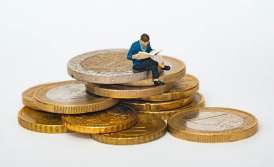 The decision of the Constitutional Court of Ukraine dated 22.02.2012 number 1-5/2012 which defined term for filing a claim about payment of average wage for the period when payment was delayed to court may turn out to be not so promising for employees as it seems to be at the first glance. Some wordings contained in this decision may be used to make procedure of such payments recovery more complicated. This comment was written by our law firm.

Among other things there is one ambiguous wording in the decision: “in order to define the beginning of term for applying to court with a demand to recover an average wage for the period when payment was delayed after dismissal one should take into consideration such following legally significant facts as non-payment of employee’s wage after his dismissal and completion of final payment”.

However, in our opinion such fears have no grounds. The Constitutional Court of Ukraine defined completion of final payment as the condition for beginning of limitation of actions period and not as the condition for an employee to be able to go to court in order to protect his violated right. Thus, an employee can file a claim about recovery of average wage for the period of delay prior to payment of money he is entitled to. For example this can be done simultaneously with filing of claim about recovery of the money.

Another thing is that an employee will be able to file an additional claim for payment of average wage for the period between court decision and actual payment. The term for filing such claim - 3 month after the actual payment.

The operative part of the decision which was made by the Constitutional Court of Ukraine is very hard to be called sensational. The court decisively states that 3-month term for filing a claim about recovery of average wage starts since the day when an employee find out or is supposed to find out that owner who caused the delay of all payments after his dismissal actually completed final payments.

The same opinion was provided in the resolution number 13 of the Plenum of the Supreme Court of Ukraine dated 24.12.1999. But not all Ukrainian courts took this opinion into consideration since clarifications of the Plenum are not obligatory to follow.

The mentioned decision of the Constitutional Court will be followed by all courts in Ukraine as such decisions are obligatory due to legislation. Though nobody can guaranty an absence of “surprising” applying of the decision.