Got medical practice license for a psychiatrist in 2016 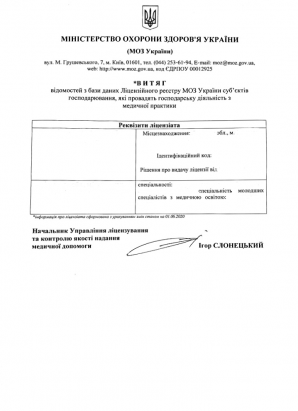 Director I. Garkusha, "Medyk" LLC
During provision of the services legal experts of the firm proved to be a professional team
Director L. Susenko, Medychni diagnostychi systemy LLC
We would like to express our appreciation to law firm “Pravova Dopomoga” for the provided services related to licensing of medical practice
I. Pruzhnyak , Sole trader I. Pruzhnyak
Despite complexity of licensing procedures, your lawyers got a positive decision about issuance of license for medical practice after the very first submission of documents...
Director S. Sokolova, LLC “Company”Nika-S”
Quick work of your lawyers allowed us to continue our medical practice without unnecessary breaks related to obtainment of the new license. Due to this we managed to avoid financial losses and continued providing high quality dental care services to our clients
Director A. Stelmakh, Private enterprise "ESTO"
We got consultations about organization of the medical center’s work, formalization of labor relations with employees, legal regulations on use of different medical equipment...
N. Gorova, Sole trader N. Gorova
I want to recommend this firm to everyone, who wants to start his or her own medical practice...
S. Lyubynetskyi , Sole trader S. Lyubynetskyi
Without any recommendations I chose law firm “Pravova dopomoga” among all other companies on the market and not once did I regret my choice...
Director Mykhailo Bogdanovych Havrylyshyn, Kalush City Center of Primary Health Care

…we can confidently recommend the lawyers of Law firm «Pravova dopomoga» as reliable legal partners on the matters of medical practice licensing and other procedures related to the Ministry of Health of Ukraine.

... Having used the services of the Law Firm "Pravova dopomoga", we managed to solve our problems, as well as found a qualified and reliable partner.

License for psychiatrists in Ukraine

In spring 2016, during the adoption of the new licensing regulations of medical practice, our company was contacted by a psychiatrist from the Vinnitsa region, who needed legal assistance in obtaining a Medical License.

The Client intended to provide his services in the building where the health care center was already located, but the center needed to expand the list of specialties, including psychiatry. In this case, it was decided to structure the expansion of the specialties through licensing of an individual entrepreneur, rather than employment of the psychiatrist. For this purpose, our Client rented an office and the first step towards obtaining the license was to confirm its compliance with the sanitary standards.

However, despite a number of positive amendments to the new licensing regulations, our Client was also expected to face some difficulties, including those related to premises. The liquidation of the Sanitary and Epidemiological Service of Ukraine and the transfer of its powers to the State Service of Ukraine on Food Safety and Consumer Protection and the Ministry of Health of Ukraine raised a number of practical issues.

Therefore, the first stage of our work was to provide clarifications regarding the authority, which the Client had to apply to for the Sanitary and Epidemiological Certificate for the doctor’s office, as well as regarding the formation of the legal position on the forms of these certificates (there was an opinion that the old forms of the Sanitary and Epidemiological Service became null and void after the liquidation of the Service, and new forms havn’t been developed and approved yet).

Following several weeks of consultations with the Client and the Sanitary and Epidemiological Service, visit of representatives of the state authority for measurement and inspection of the premises, our Client managed to obtain the certificate of expert’s examination of his doctor’s office.

In parallel with applying for the certificate, our lawyers prepared statements on the material and technical basis and the qualifications of personnel to be attached to the application for a Medical License.

Thus, at the time of receipt of the Sanitary and Epidemiological Certificate, we had a full package of documents, including a notarized power of attorney authorizing our lawyers to represent the Client’s interests.

The Client’s case was successfully considered at the first meeting of the licensing commission, and a week later, we received a letter confirming the decision to grant a license and the need to pay the official license fee.

Having paid the fee and submitted the payment document to the center of administrative services of the Ministry of Health of Ukraine, we had to fulfill the final stage, namely to sign the license form. This procedure usually takes about 1-1.5 months. In view of all this, other licensing authorities have an obvious advantage over the Ministry of Health, since they allow to more promptly obtain the license form, even before the payment of the official fee.

Once the license form was signed, our lawyers obtained it and sent it to the Client by courier delivery service. 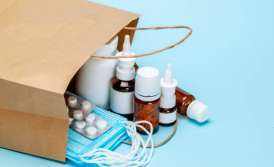 Drugs and Precursors in a Medical Center 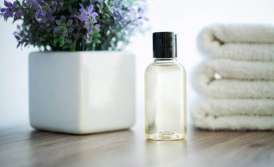 Accounting and tax accounting of cosmetology clinics in Ukraine in 2022